TAKE HOME FINDINGS:
​
Consequences of acute social stress may be mediated by immune system within the brain.

Microglia in prefrontal cortex are activated by acute trauma alone and "primed" for greater future activation.

Image adapted from Hinwood et al., 2012. This served as guide for qualitative appraisals of microglia morphology and thus activation state. 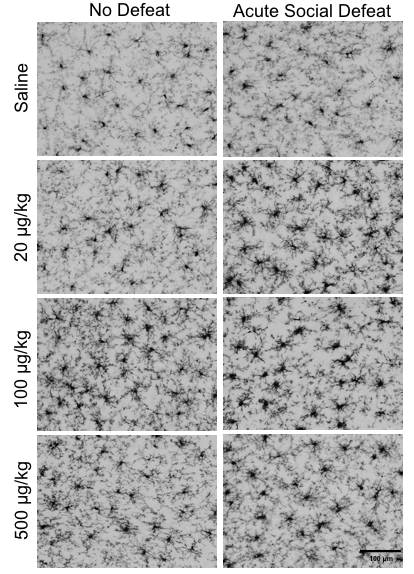 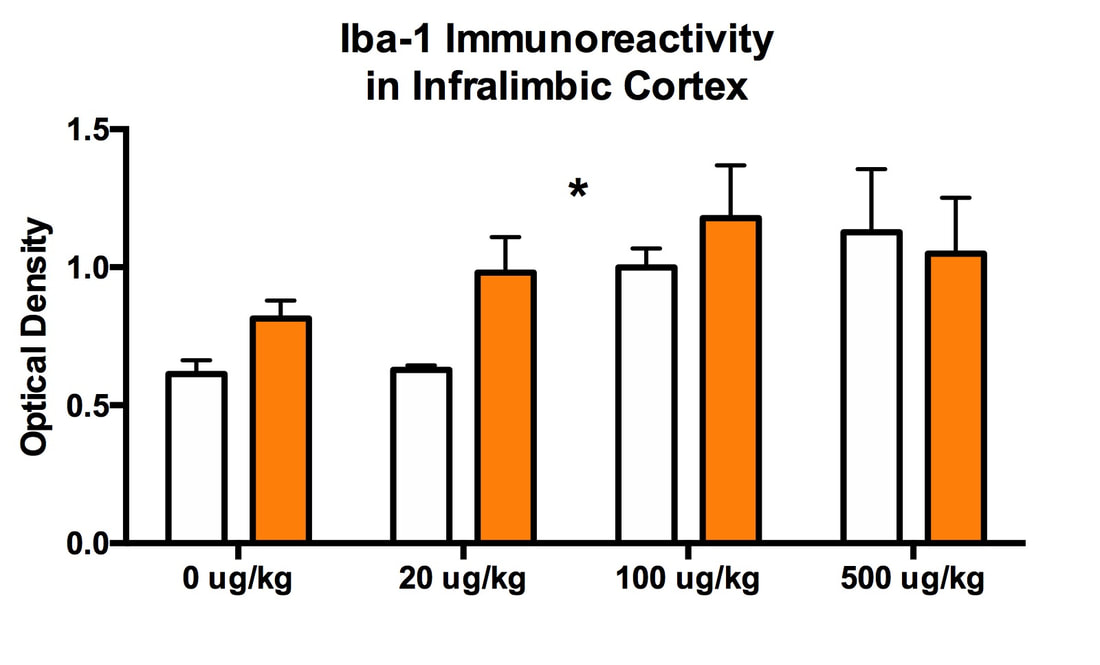 Following social defeat stress, animals were injected with 0, 20, 100, or 500 ug/kg of LPS and euthanized 4-hours later. Presented here is the optical density of Iba-1 expression in the infralimbic subregion of the vmPFC.
Shown in white = no stress; orange = acute social defeat​
The asterisk denotes a significant main effect of LPS treatment.
​n=7-10/group 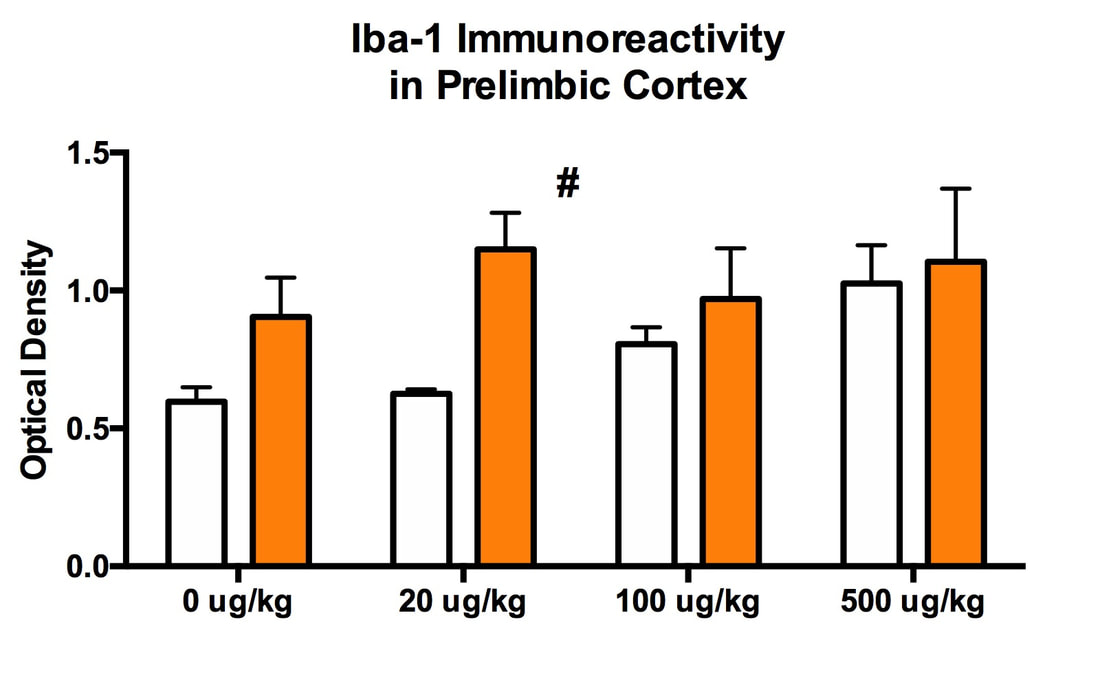 Presented here is the optical density of Iba-1 expression in the prelimbic subregion of the vmPFC.
The pound sign denotes a significant main effect of social defeat.
Shown in white = no stress; orange = acute social defeat​​
n=7-10/group 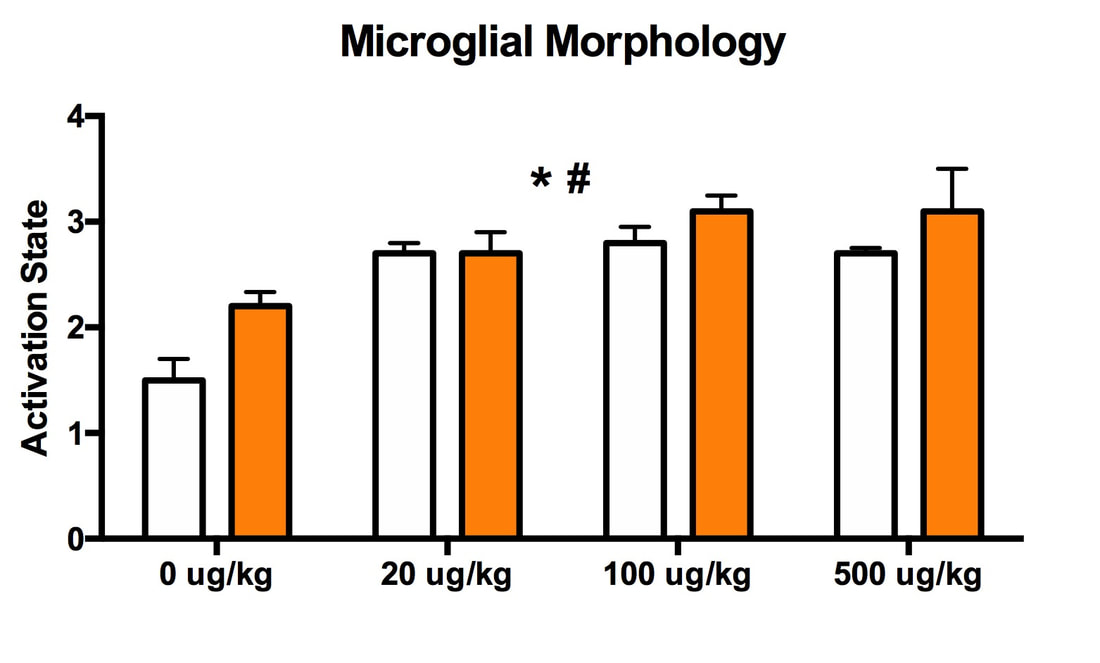 Qualitative appraisals of microglial morphology states based on schematics shown in Hinwood et al., 2012 (above) indicate that acute stress induces morphological changes in microglia, as does treatment with LPS.
The asterisk and pound sign denote significant main effects of LPS and social defeat.
Shown in white = no stress; orange = acute social defeat​
​n=7-10/group 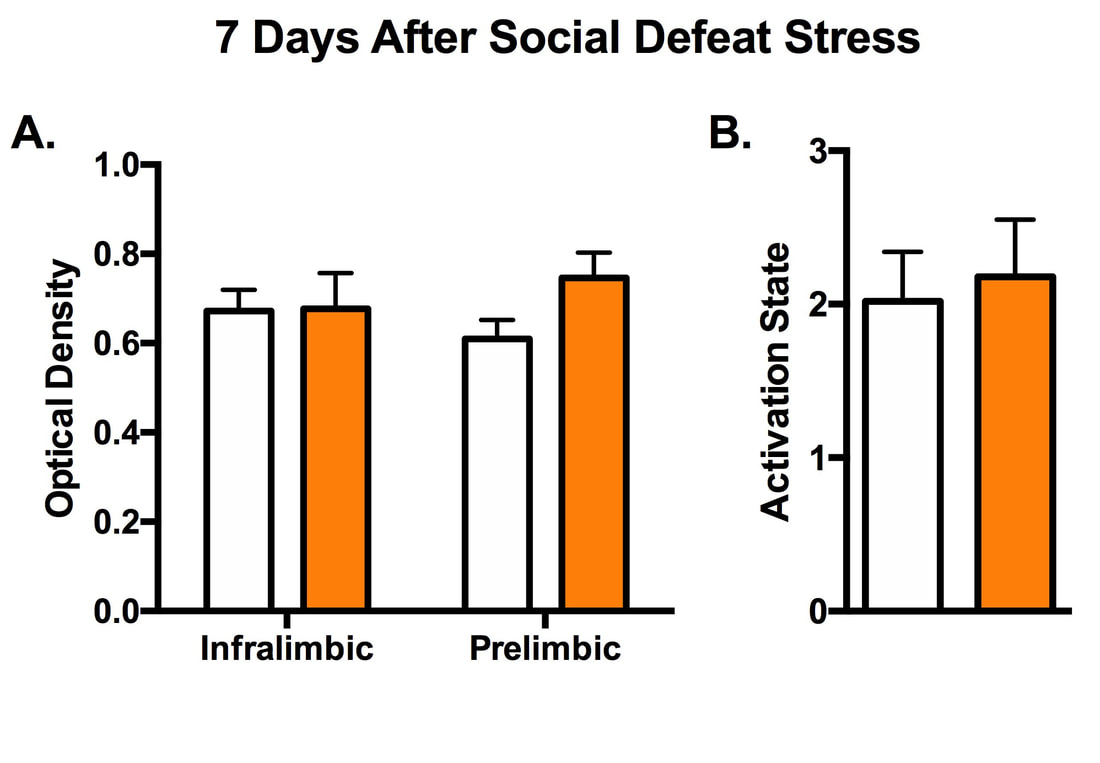 A) Optical density of Iba-1 expression 7 days following defeat. No significant differences were observed in either the infra- or prelimbic cortices of the vmPFC.
B) Qualitative appraisals of microglial morphology. No significant differences were observed. Data are presented as pooled across vmPFC subregions.
Shown in white = no stress; orange = acute social defeat stress
​n=10/group

​We detected no evidence that acute stress induces prolonged activation of microglia, including a hyper-arrested ramification state as discussed by Hinwood et al., 2012. This was evidenced by no prolonged elevation of Iba-1 expression or changes in morphology 7 days after acute social defeat stress.

To determine whether microglia cause cellular damage within the vmPFC in a manner that might influence social avoidance behavior following acute social defeat, we treated a subset of hamsters with the antibiotic minocycline which has been shown to halt microglial activity.

Animals were treated for 48 hours with minocycline in drinking water (as discussed above) and subjected to a social defeat. 24 hours later, animals were tested in a conditioned defeat test and social interaction test in a counterbalanced manner with continuous minocycline treatment and were euthanized 24 hours later for IHC quantification of cellular degeneration using a silver stain. 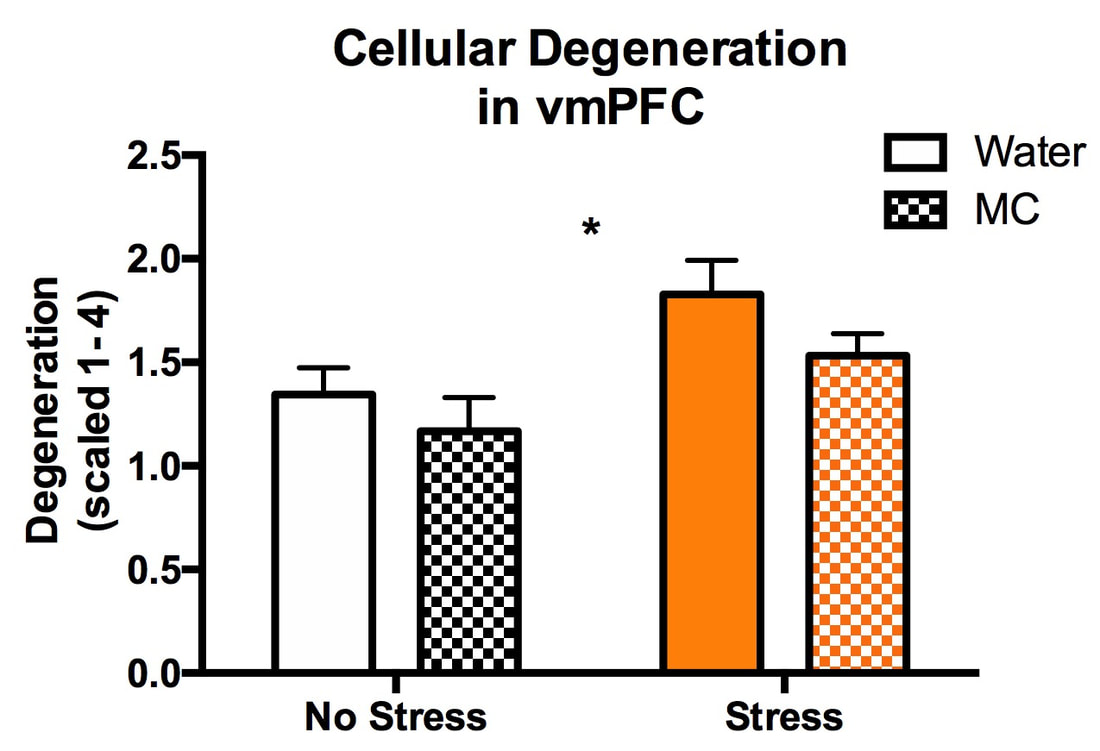 Qualitative appraisals of collective degeneration within the vmPFC indicate a main effect of stress with a marginal reduction by minocycline, which halts microglial activity.  This suggests that acute stress induces cellular degeneration which may be reduced with minocycline administration. Degeneration was approximated on a scale of 1-4 wherein 1=minimal degeneration and 4=maximal degeneration. n=8-12/group. 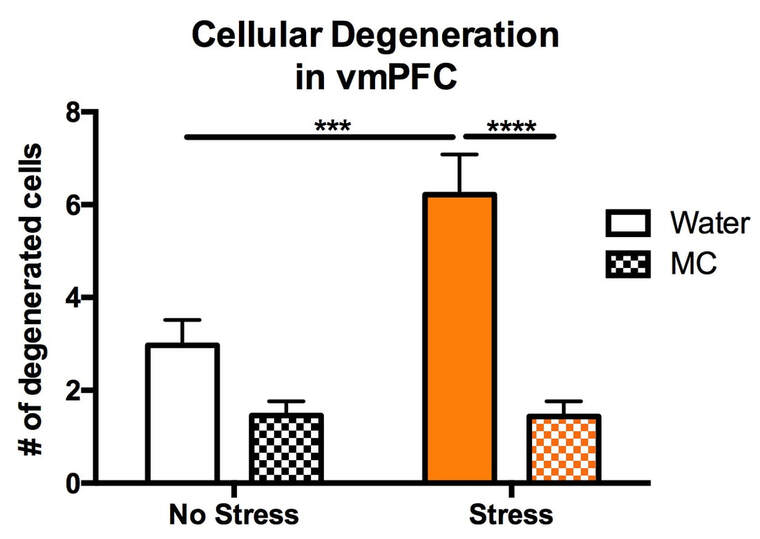 Analyses of Amino Cupric (Silver Stain) indicates a greater collection of degenerated cells within the vmPFC of stressed hamsters having been treated with regular drinking water. This effect was protected by minocycline administration, suggesting that stress drives degeneration of what appear to be astrocytes in a microglial-dependent manner.
n=8-12/group 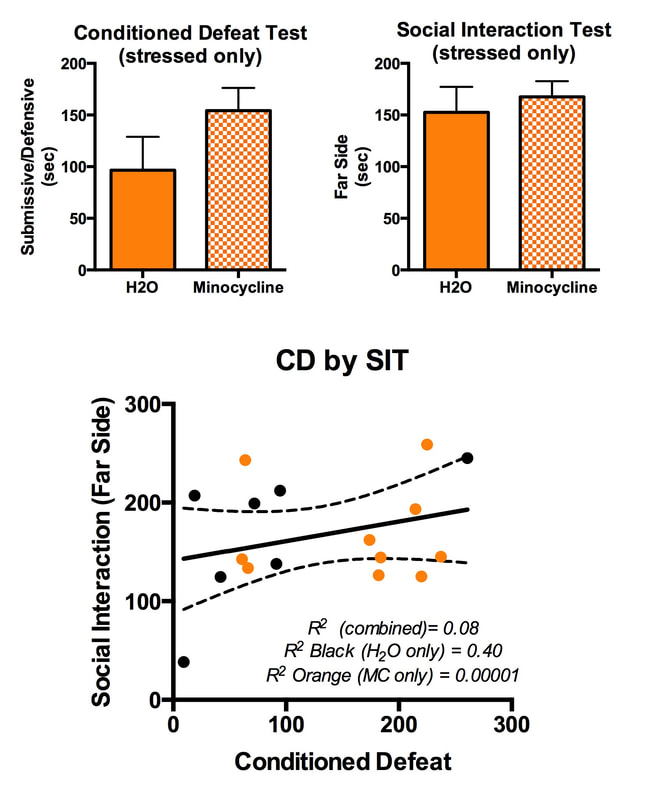